Cutting kids hair may seem a scary prospect at first, but with a little bit of practice and plenty of patience, you can easily do it at home.

My two kids have only been to a salon/barber two times, and realistically, that’s because we’ve wanted to support a friend who works there. We have taken my oldest son there twice in the past, in order to get his haircut. He really liked the novelty of it all, and his hair looked pretty good. I should also note that I have two boys - I’ve never cut a girls hair, and neither has my wife.

We basically always cut our kids hair at home. There’s very little reason why we shouldn’t at this stage of their life. Most younger kids do not worry about how their hair looks. They aren’t looking for little imperfections or if things aren’t exactly even. While kids are still young, they generally don’t have the requirement to worry about every little thing, including little imperfections in their hair. That type of attitude is generally something they learn as they grow older due to the pressures put on them by society.

At a younger age though, their hair is not their top concern. More likely, you as a parent worry more about their hair than they do. As is common in parenting, it’s the parents that push their worries and concerns onto their kids, when in many cases there’s no reason to do so.

This isn’t all to say that your kids should look like rats with their hair. You shouldn’t let your kids cut their own hair - they really do a terrible job with it when they do, trust me. You should make your kids hair look reasonably presentable, but if one side of their hair is a little bit longer than the other, it probably won’t even be noticeable. 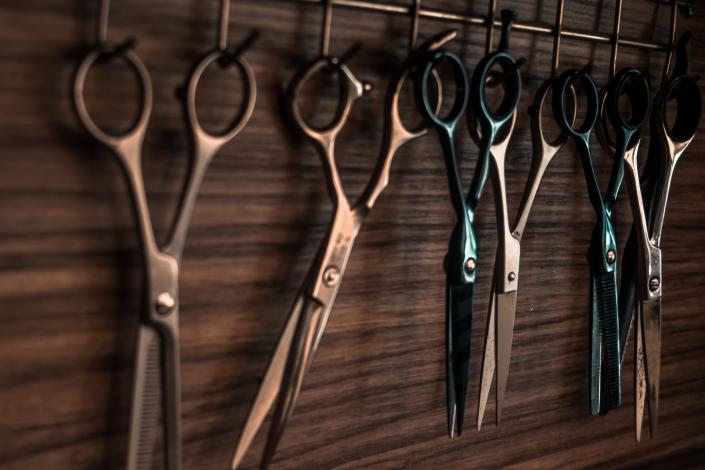 Photo by Nick Demou from Pexels

In order to cut your kids hair at home, you really only need two things: scissors and hair clippers. You’ll also need a comb, but I’m assuming that’s something you have around the house, and it doesn’t really need to be of a special variety.

First off, you’ll need some hair clippers. Make sure you have a pair that are sharp enough that they’re not pulling your kids hair. A new pair of clippers should be fine, but if you’re using older clippers, you’ll want to make sure that they don’t pull on your kids hair, because they won’t want to have their hair cut ever again if it does. You’ll also want to have several different attachment sizes that connect to the clippers - it will make your job easier.

In terms of scissors, make sure you get a pair of scissors that are meant for cutting hair. Trying to use the shears from the kitchen, or your kids safety scissors won’t work well (although kids seem to do a good job of using those). These scissors will make cutting kids bangs easier to accomplish and will give them a slightly nicer look.

How to cut kids hair

When your kids are still quite young, there’s a good chance they’re going to be scared of the hair clippers. You’ll have to work to get them to stay as calm as possible - you’re likely going to need two adults at this age until they get comfortable enough with the hair clippers. We set our child down on a stool on the floor, strip him to his underwear, hand him a phone with something on it he normally can’t watch, and one of us will hold him and distract him to keep him calm. Our oldest son has no issues at this point and will sit calmly while his hair is cut. It’ll take some patience with young kids though.

Depending on how you want your child’s hair to look, you’ll take different strategies. If you just want a straight cut where your child’s hair is all the same length, this is the easiest to accomplish. Get the hair clippers, put on the attachment for the length you want, and go to town. It may take a bit of practice to get all of the hair so there aren't a ton of little hairs sticking out, but this is a great strategy if you want your kids' hair evenly the same length all around.

If you like your kids hair to have a bit of a fade to it, then you’re going to do a little more work. Once again, your goal isn’t perfection here - it’s to make it look presentable while getting rid of some of the hair. The best way to accomplish this is to choose one of the attachments that is a little shorter in length than the longest attachment you have. You’re going to start at the bottom of your child’s hair, and go up the side of their skull. When you get about an inch from the top of their hair, pull the clippers away from the skull slowly (so as to not pull your child’s hair). Repeat this all the way around their head. In the front of their head, get your comb and pull their bangs forward, and cut their bangs evenly with your scissors.

If you want your child to have long hair (either for a girl or a boy with longer hair), the clippers likely aren’t going to be used here. Also, I’ve never done this, so my suggestion would be to watch some Youtube videos on the matter (in fact, you should be watching a few videos on any of these strategies if you’re worried). The basic idea is that you’ll comb your child’s hair evenly out, and then you’ll use your scissors to cut the hair evenly around their entire head. Remember then when your child is young, it will be uncommon that their hair is always perfectly even other than when you’re combing it - little imperfections will not be noticeable unless you’re specifically looking for them.

Cutting your kids hair at home doesn’t have to be hard, and can be a way to save time (and money) by not going somewhere to pay for it. With a little practice, you can make your kids hair start to look good.