Similar to sand, kicks have a fascination with water. If you’re not swimming, then throwing rocks into the water can be a lot of fun for the family. 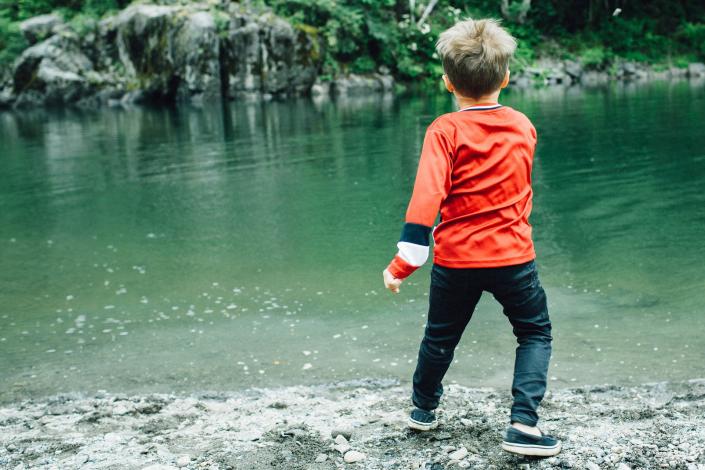 Image by Jacob Johnson from Pixabay

Water is a lot of fun for kids. It’s also extremely dangerous. If you’re spending time near large bodies of water, be sure that you’re watching your kids closely. Additionally, you should teach your kids the importance of water safety, and how water can be a lot of fun but dangerous at the same time.

Most kids can play in the water for hours a day. My kids would play all night in the bath if I let them - they’re often begging me to get in the bath, even on days we don’t normally get in. To be fair, it’s been a hot summer, and we haven’t been doing the pool too much this year. Water is a lot of fun for kids.

One of the things that both of my kids like to do is throw rocks into the water. We have a little creek quite close to our home, and my kids love going over to it to throw rocks into it. My older son likes to find the biggest rocks he possibly can to throw in, in order to make huge splashes. My younger son likes to simply get the rock into the water. We can’t get right up to the water, so throwing rocks in is how they are able to get their joy from it. They’ll sit and throw rocks at the water for 30 minutes when I let them.

Heading to a lake is also a great place for kids to throw rocks into the water. Obviously, you should make sure you’re avoiding areas that have people that are fishing. They won’t be too happy with you when you’re throwing rocks in the water where they’re trying to catch fish as you’ll scare them all away. A lake gives a huge mass that you can throw rocks at, and the splashes can be awesome.

A lake is excellent for skipping rocks as well. Teaching your child how to throw a rock across the lake at the right angle is a great teaching opportunity. It can also lead to some frustration for your child as well if they can’t figure it out. If you don’t know how to skip rocks, then you can learn yourself. Skipping rocks across the water is fascinating, even as an adult. Trying to get that rock to skip more than five times in a row is a great way to challenge yourself to get it just right across the water (and a way to hope for calm water).

A river can also be used for throwing rocks into, but be extra cautious. There’s no worry about the rocks in the water, but with your kids near a moving body of water. Lakes stand still, so your kids aren’t going to get swept away by a current. Rivers present an interesting challenge for skipping rocks across, and it can be a lot of fun. Kids that don’t see large rivers often may be fascinated by them - we live close to plenty of lakes, but huge rivers are uncommon, so my kids really like when they get close to one.

An ocean can also be used, but skipping rocks is likely out. Oceans are too wavy to really make skipping rocks a possibility. As long as you’re not on a swimming beach though, throwing rocks into the waves is fun. My kids like to grab a lot of small rocks near large bodies of water and see the spray that the rocks make.

Sometimes, as a parent, it’s the simple activities that you need. Throwing rocks in water doesn’t take a lot of work or preparation on your part, but it gets your kids outdoors, and lets them play near the water. It’s a win for everyone.