Get out and play in the snow with your kids. 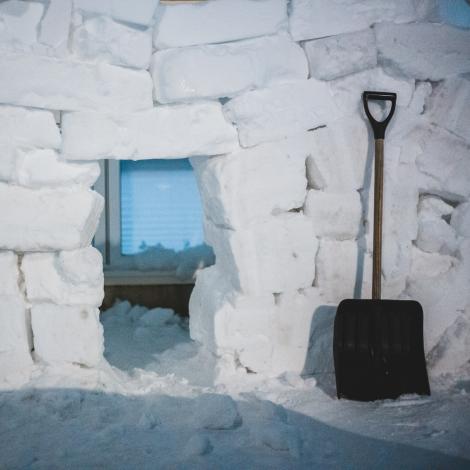 Photo by Erik Mclean on Unsplash

Playing in the snow is a great way to spend time with your kids, while being active. It’s a lot of work walking and playing in the snow. You’ll definitely get your heart rate up, and you’ll burn off a little bit of energy with all of the clothes you have to put on and take off (as well as helping your kids get their clothes on and off).

We recently wrote a little bit about sledding, and that is one way that you can have fun for a day in the snow. The biggest problem with sledding is that you need a hill that you can sled on, and most people don’t have a big enough hill to really sled on. You’ve got to make a journey to get to a sledding hill.

If you get enough snow, then one of the most fun things that you can do is to build a snow house. Building a snow house isn’t exactly a small undertaking, so be prepared to spend a few hours on this project. The nice thing about a snow house is that you can easily build it close to your home assuming you have a backyard or an apartment with a decent playground area.

The other tool is going to be to make snow blocks. You can also do this all by hand without this item, but the snow block tool will make this go much smoother, and you’ll get a much nicer looking house. The snow block maker is simply a rectangular piece of plastic that you pack snow into and then tilt the block out of it.

To build a snow house, clear an area that is big enough for you to sit down in plus an extra foot. 4 to 5 feet square is generally enough. Next up, grab the snow block maker, and start making snow blocks. You’re going to be making a couple hundred snow blocks. Start in a corner, build the base, and then build your next level on top of that. You’ll probably want 5 or so blocks high for your wall.

If you don’t have a snow block maker you can still make a snow cave, but you’ll be doing a lot of additional digging. You’re going to need to pile snow about 4 feet by 4 feet by 5 feet (or longer if you want to go in there as well). From there, you’re simply going to be digging a hole into the pile of snow. This will be a lot of work, and expect to work up a really good sweat doing this. You need to get enough snow out that you can get into the snow cave, but not too much that the snow cave collapses on you or your kids.

The snow block builder is certainly the better option for those with smaller kids. There’s less likelihood of the walls collapsing on your kids, and if they do fall down then it’s really not too much snow. It’s also the easier way to build a snow fort for the kids as well, and they’ll be able to more easily help.

Get out and play in the snow. It’s fun for you and the kids, and it will help you to get your heart rate up.