Let your kids have painted fingernails and toenails if they want. 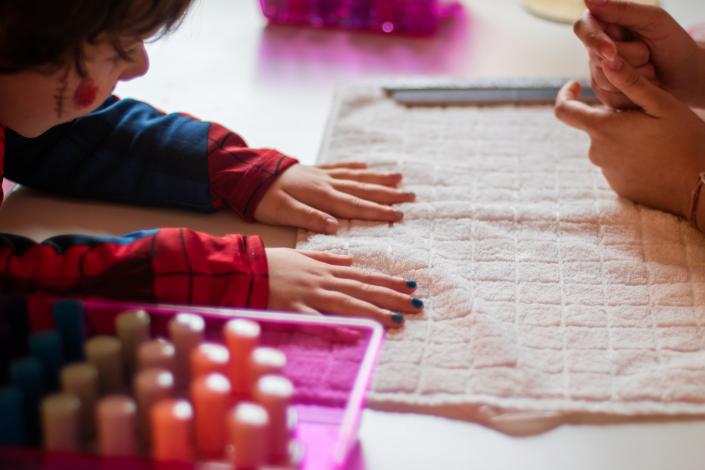 Photo by Portuguese Gravity on Unsplash

Kids like coloring, and they like painting. While some kids may not sit and do either of these things for long periods of time, they still enjoy them for short periods of time at the very least. For whatever reason, seeing color show up in a place where it wasn’t before is pretty exciting for a young child. It’s pretty cool if you stop and think about how it works - it’s no wonder kids like to color and paint.

As such, it should come as no surprise that kids are usually fascinated by nail polish. Not only is it paint, but it’s paint that you put on to yourself. How often does your child take a marker or paint or something else and draw on their hand or face? More often than you’d like. Nail polish is literally made just for that to be done. It’s made to go on your body and to change the color of your nails.

If you paint your nails, at some point your child is going to ask to have their own nails painted. You’ll have to make a decision as to what you’re going to do. Are you going to paint their nails or not let them have them painted? The answer should be dependent on one thing - age/maturity. Are you comfortable with their age and having their fingernails painted? Can they sit still long enough while you paint them?

You may notice something that isn’t present in this decision: gender. You should treat your son or daughter the same in regards to painting their nails. Just because your son has asked to have his nails painted doesn’t mean that you should deny him that just because he’s a boy - painting nails is not a gender specific activity that has to be meant only for females. Do not enforce gender stereotypes.

Painting nails is simply a fun activity that a child likes to do because they get to have some color on their nails. Guess what - there’s a good chance that your child will not like how it even looks. They may like how it looks on you, but they may think it makes their hands or feet look funny anyways. And if they like it, that’s fine as well. You don’t have to paint their nails on a regular basis - simply make it a fun activity.

Just because your boy wants to paint their nails does not mean anything really - it simply means they want to have fun exploring the world. If your child is older, you may want to explain that some kids may think it’s funny if their nails are painted and to ignore them if they make fun of them. Unfortunately, not all kids are raised to be accepting of other people’s choices and it can have a negative effect on your child.

Painting your nails is really no different than letting your child put on a fake tattoo if you think about it. It’s something that goes on to their skin and will wash off shortly. Nail polish goes on your nails and will wash off shortly. If you’re willing to put one of those fake tattoos on your child then there’s absolutely no reason that you shouldn’t be willing to paint their nails, the same way you paint your own.

Paint your child’s nails if they want - don’t deny them based on gender. For your child, it’s really just a fun activity. It can lead to fun and important conversations about life as well.