Chasing after bubbles is a fun way to spend time for most kids. Add in a way to catch the bubbles and you’ll have a fun time for everyone. 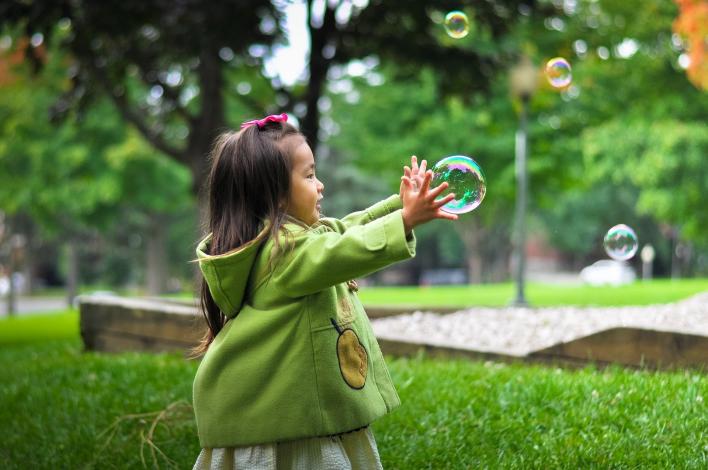 Image by Free-Photos from Pixabay

We’ve come full circle at our home. We bought butterfly nets early in the summer, and we followed it up with a nice bubble maker. With butterflies being so hard to catch, the kids have mixed it up by now trying to catch bubbles, instead. Kids have great imaginations, and can pretend the world is basically anything they want.

Butterflies are extremely hard to catch. We’ve spent plenty of time trying, but haven’t had much success. We took the butterfly nets out almost everyday in the summer, but had very few butterflies to actually show for our efforts. Over time, the kids enthusiasm for catching butterflies disappeared.

Similarly, bubbles are a lot of fun, but eventually the kids may get tired of them. While we didn’t turn bubbles on every day during the summer, they were on most days. The kids liked to run around and pop them with their fingers, or see how far they would fly. After a while though, they kind of lost a bit of interest.

While looking for a new activity to do that the kids would be excited for, I suggested a game of catch the bubbles. Butterfly nets were pulled out, and used in order to capture as many bubbles as we could. The goal was to not let any bubbles get away from us - with three of us, we still failed miserably.

A decent bubble machine will produce a ton of bubbles, and outside of putting your net right over the outlet where the bubbles are made, some are bound to get away. However, kids have plenty of energy to try and catch as many of them as they can, and that was really the goal - tire the kids out while having a fun time together.

As usual with the games that I suggest, this one requires that you be active as well. While it’s great that your kids are running all over the place, one of the great benefits to joining them in these games is that you get to be active as well. You also get to spend quality time with your kids. While you don’t always have to join them, this is a fun game that you can join in with.

To mix it up a little bit as well, my oldest likes to pretend that the bubbles are Coronavirus. Our goal is to keep the virus from spreading to other people. It’s great motivation to help keep the bubbles contained, hopefully better than we’ve done with the actual virus.

Finding games that you can play with toys that you already have can help put renewed energy into your kids playing with them. While we’re likely going to be putting the butterfly nets away soon (once the snow comes), getting them back out and using them in a new game has renewed the kids excitement for them.

Don’t be afraid to try new games with your kids. If they end up not liking it, then so be it. But you’ll never actually know until you try it.